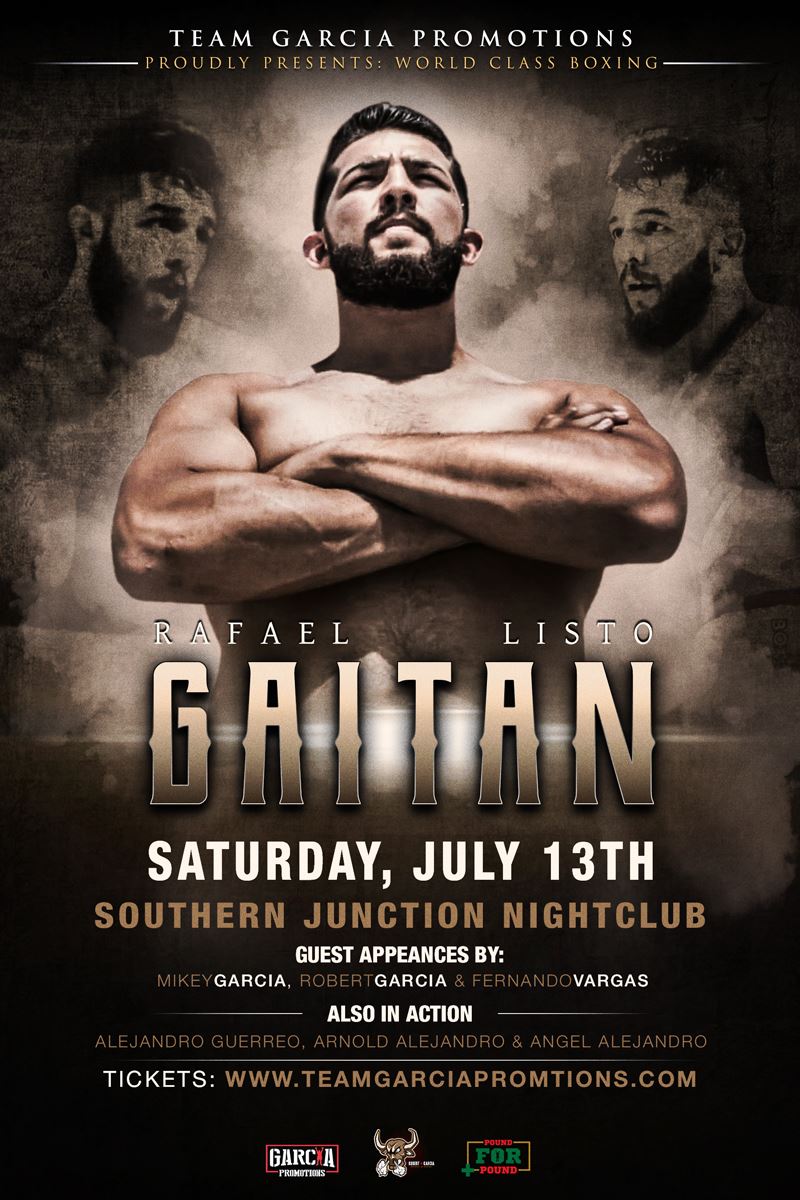 Headlining Team Garcia Promotion's July 13th event in Irving, Texas will be 20-year-old Rafael "Listo" Gaitan. After an impressive (69-3) amateur career, "Listo" has made the jump to compete at the professional level, starting off with a perfect (4-0) record with 2 knockouts. The 6'1 pressure fighter has shown no shortage of upside and has his mind set on making an impact on the Light Heavyweight (178 lbs.) division. Looking forward to his upcoming bout, Global Fight Talk conducted a Q&A with the prospect for some insight on his mindset and what it's like to train under his father.

From Grand Prairie, TX, "Listo" explained that he was basically born into the sport of boxing.

"I got into the sport through being from a family of boxers. My Grandfather did it, my Uncle did it, and so did my Dad. I was introduced into boxing simply by being surrounded by it." He said, adding "Although I'm the first to go pro, if it wasn't for them, I would not be able to take it to the level we're at today."

Many believe that fighters are born, not made, and "Listo" was certainly born a fighter. However, fighters need the kind of guidance and training that is provided by the Father of "Listo", Rafael Gaitan Sr. Nicknamed "Coach Knuckles" around the S.W.E.A.T Boxing and Training Gym in Irving, Tx. Gaitan Sr. is propelling "Listo" to world-class status one day at a time. Interested in the relationship between "Listo" and his Father/trainer, we asked him how he and "Coach Knuckles" balances the two.

"When it comes to being both a trainer and Father, it has the advantage that he will push me to my absolute limits. He makes sure I am giving 100% but at the same time, he makes sure my health is also 100%. He's always said to me, and anyone that asks, that he will not risk me getting into the ring with any health issues or injuries that will risk possible permanent damage to myself." Given the successful dynamic between "Listo" and "Coach Knuckles", he also sees a possible flaw in training with him as long as they've trained together. "The only disadvantage I would see would be that maybe throughout years of me boxing some of the techniques that have worked for me for so long, [There might be] slight flaws that need adjustment. He's gotten used to seeing me fight in a certain way."

Gaitan can be described as a pressure fighter who puts a relentless pace on his opponents. It's something that takes both mental and physical strength to keep up. Few fighters can handle it, and even fewer fighters can perform it. When asked about it, "Listo" attributed it to the classic "Mexican-style"

"I feel my aggressive style comes from the machismo behind Mexican boxing. [I've] always fought that way, through sparring and amateur tournaments and it's often made guys give up. However now as a pro, I feel I am becoming more patient and not wasting punches and energy like I used to. From the 2nd fight moving forward, our camp has been focusing on being much more technical and patient."

The Mexican style that he spoke of is the type of style that can get you into a war with your opponent, and that's exactly what happened in his debut vs. Rynell Riley (1-0 1KO). Certainly the toughest fight of the "Listo's" young professional career, he was forced to dig deep for 4 hard rounds with Riley. He told us a little about what helped him grind through the fight and earn the unanimous decision victory.

"My motivation was from hearing all the people who were there to support me chanting "Listo!". How everywhere I looked I saw my name on friend's and family's shirts. I just couldn't let them down. I didn't want to begin my professional career with a loss on my record [so] I knew I had to find a way to beat my opponent"

July 13th "Listo" will be fighting Robert Hill (2-4) in a 4 round featured bout. After a tough start to his career, Hill is coming off a victory on his own and could give "Listo" some problems in the ring. We asked Gaitan about his upcoming bout, and what he thinks of Hill as an opponent.

"I believe he will be coming out to give me a very tough fight. He might be an aggressive opponent, but as long as I keep my composure and listen to my corner, I believe we will be able to set up some of the combinations we have been training during camp"

When asked who he'd like to thank for his success so far, he explained

"[I] Most definitely would like to thank my parents. My Mom and Dad have always pushed me very hard and made sure I was on the right path to make the choices I have made to have a successful career both as an amateur and now as a pro. Also, Hector Vazquez, who has been sparring with me since I was about 14 years old, helping me get ready and now making sure I perfect my craft as a boxer. A huge thank you to my current sponsors Medina Drywall, Eddies Quality painting, S.W.E.A.T Boxing for always being part of my team from amateurs and now to pros. Also, Norma president of D.I.F INC, for also being part of our team as its gradually growing. Another huge thank you to all of our people who continue to find a way to be part of every fight night, from cheering me on to joining us on media days and weigh-ins. It is because of them that we are in the position that we are in today, being able to fight as the Main Event in our home town, I am extremely thankful for crowds we are able to bring and the atmosphere we are able to create. I am looking forward to doing it all again July 13th."

We at Global Fight Talk are looking forward to July 13th as well, as we are impressed by the humble and talented Rafael Gaitan. We will definitely be tuned in to watch his next performance and wish the best for him and his professional career.