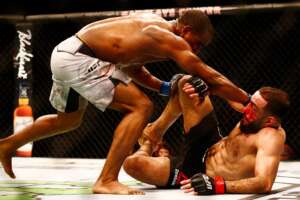 Early in the fight "Hands Of Steal" set the tone, stalking Muhammad around the ring, landing stiff jabs, and his signature straight left hand. As the fight went on, the 28 year old began to establish his dominance as a striker, nullifying the offense of Muhammad and finding openings in his defense. Neal's incredible accuracy was on display, he looked as if he couldn't miss the target if he tried to. The southpaw also showed versatility in his game, stuffing each of Muhammad's 7 takedown attempts to keep the fight standing, where he looked extremely comfortable. Neal also landed 2 knockdowns (one via headkick) that appeared fight ending, but Muhammad displayed his incredible resilience and recovered each time. The judges scored the clear unanimous decision for Geoff Neal who is now on a 3 fight win streak in the UFC.

The future is bright for Neal, who certainly earned the attention of the entire welterweight (170 lbs.) division with this performance coupled with his highlight knockout of Frank Camacho in his last outing. Rarely will you find such talented striker with his composure in the octagon, who can keep the fight standing and land big shots like Neal. Welcome the list of UFC welterweight contenders Geoff Neal.