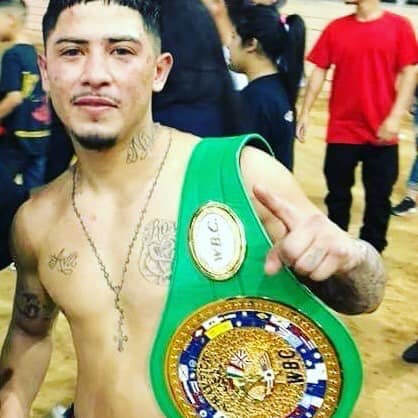 Undefeated 24-year-old Ernesto "El Gallito De Oro" Delgadillo is the current WBC USNBC Flyweight (115 lbs) champion. Born and raised in Dallas, TX, the southpaw is 11-0 with 2 knockouts under his belt. With a long career ahead of him, Global Fight Talk had the pleasure of speaking with Delagadillo about the future of the aspiring world champion.

"I'm from the struggle" Delgadillo explained, regarding his humble beginnings. The neighborhood he was raised in didn't exactly set Delgadillo up for success, and he feared he would end up like his father, who was absent in his life. "I wanted to overcome all of that. And it really feels good to do it."

As much of a talented prospect as Delgadillo remains to be, boxing wasn't always seen as an occupation for him. For much of the time, it served a hobby for Delgadillo. "I never really saw boxing as a career. I got into it to get away, but I guess God me gave a talent that I couldn't resist." He expressed.

After parting ways with his former trainer, Delgadillo was referred to Tony Mack, a former boxer whose career was cut short due to injury. "I've known Tony since the amateurs, but a buddy of mine told me to go see him, and since then, we've kind of clicked." Delgadillo feels confident going forward under Mack, and when asked what it's like to work with such an exceptional trainer, he informed us of the immediate improvements in his style as a boxer. Naturally, Delgadillo adopted the "Mexican style" which compliments him as an aggressive southpaw. Now, he hopes to combine that with the guidance of Mack to continue to become a more complete fighter "He's teaching me more of a pro-style; When to sit and when not to sit on punches. It's been great, everything is working out with him." He explained.

The improvements in Delgadillo's game are beginning to become apparent as he continues to grow as a fighter. In his last bout, he defeated Nate Green (10-1 2KOs) via unanimous decision. "It was a good fight. I wanted the knockout but he was holding me too much" He recalled. Prior to that fight, he defeated fellow Dallas native Oscar Mojica (12-5 1KO). The two previously spared, allowing each fighter to enjoy an extra insight into the style of their opposition. Mojica presented several problems, pressuring Delgadillo and throwing a plethora of combinations. Delgadillo showed excellent composure however, remaining patient, and taking over the fight using his jab. Eventually Delgadillo took over the fight, earning a split decision victory.

Delgadillo looks to continue to represent Dallas TX, where he trains and was born and raised. "It's a great time to be from Dallas I guess" he explained. In a time when guys like IBF welterweight (147lbs) champion Errol Spence (25-0 21KOs) top the pound-for-pound rankings representing Dallas, TX, Delgadillo sees it as an opportunity of his own "I'm just trying to ride the wave. I grew up with those guys and I feel like I have the potential to be where they're at as well. I feel like I can be a world champion." He expressed.

Currently, Delgadillo doesn't have any fights confirmed but looks to return to the ring around May and continue to build his legacy. He cites his 4 children as his motivation to continue to succeed. "[Having kids] became a great thing for me. It taught me how to settle down and stay focused. Me growing up without a father made me want better for them. My family and fans that support me, that's what really keeps me going every day." He confessed. Shortly after, he was simple regarding the people that he wanted to thank for his success. "God. I'm putting everything in his hands." A promising prospect like Delgadillo is one we certainly want to keep our eyes on. We're excited to see his career unfold, as we know the sky's the limit.

2 thoughts on ““I’m from the struggle” The neighborhood he was raised in didn’t exactly set Delgadillo up for success. Now Delgadillo is the current WBC USNBC Flyweight (115 lbs) champion”