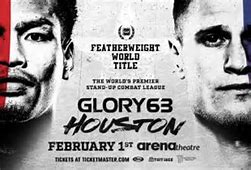 GLORY 63 took place on Friday February 1 at the Arena Theatre in Houston, Texas. The event is the promotions first in the Lone Star State. As always, Glory never fails when bringing the best in stand up.

GLORY 63 main card kicked off with newly crowned featherweight king Petchpanomrung Kiatmookao (162-36-2, 27 KOs) who made his first title defense against former champion Serhii Adamchuk (38-10, 14 KOs). These two are no stranger to each other.  Kiatmookao previously beat Adamchuk two years ago via split decision.  This time around Thai superstar outclassed Adamchuck from the start to finish.

Kiatmookao who is known as the “Professor” picked Adamchuk apart with kicks to the legs and body. Adamchuck became frustrated when he couldn’t get his offense going but towards the end he was able unravel down the stretch by hitting on the break and tried roughing up the professor.

Kiatmookao seemed to get more aggressive as the rounds went on and turned it up in the championship rounds by throwing kicks to the head and body and throwing flurry of combinations that backed Adamchuck to the ropes. Adamchuck tried to come back with his own attacks with combos and the side kick that he threw continuously throughout the fight but the Professor remained calm and seemed unfazed.  In the end, all three judges saw the fight for Kiatmookao 50-45 to remain Glory featherweight world championship in his first title defense.

Here are the fight results for Glory 63 Houston: