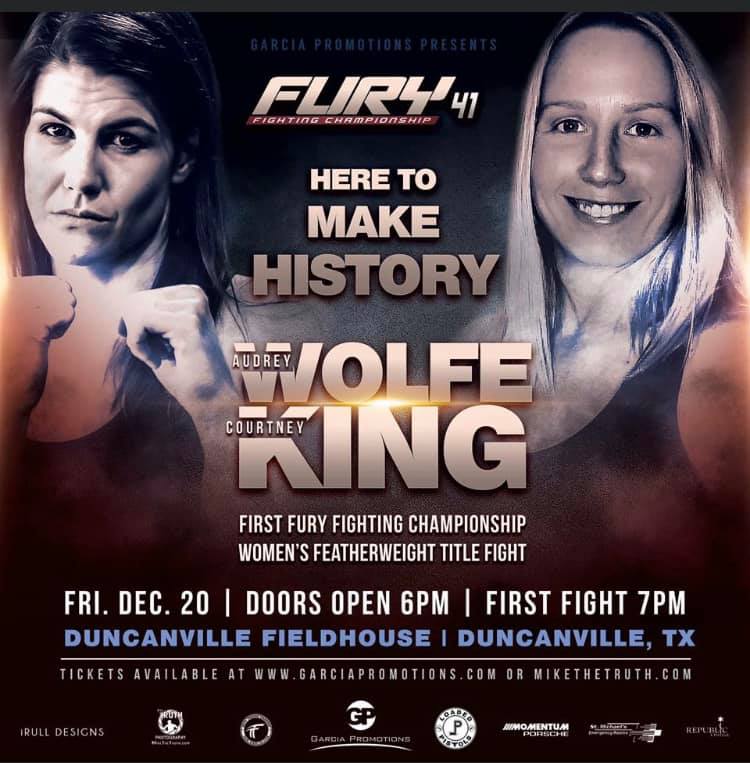 Friday night, Fury Fighting Championships delivered yet another exciting night of Mixed Martial Arts. Fighters primarily from around the Dallas, TX area, including multiple Fortis MMA prospects, put on quite a show in Duncanville Field House to the pleasure of everyone in attendance and fight fans who watched from home. The main event lived up to the ticket as Courtney King (4-1,1KO) defeated Audrey Wolfe (4-1-1) in an absolute war to become Fury FC’s inaugural Featherweight champion. Early, the two fighters exchanged with reckless abandon and both fighters painted a clear picture that they didn’t plan on leaving without the belt. Wolfe landed a right hand that staggered King and drew gasps from the audience, but moments later King landed a body lock takedown that shook the floor of the entire venue. In the second round, King took control of the fight, landing multiple take down attempts and sinking in a rear naked choke with about 20 seconds left in the round. Wolfe showed incredible toughness, however, fighting the choke as long as she could, and eventually being forced to wait for the round’s end as she was nearly choked unconscious. King came out the final two rounds and continued to dominate the fight with her pressure and grappling. Wolfe landed shots that backed her opponent up at times, but she couldn’t stop the takedowns and constant pressure of King who eventually ended the fight in the fourth round via submission. When I asked the new champion how she dug deep to take control of the fight her response was unexpected. “I didn’t want to fight any more rounds” she said with a chuckle. “I’m a little beat up, and I’m tired and I wanted to be done”

In the co-main event Julius Holmes (5-2,2KO) defeated Clinton Williams (7-5, 2KO) via submission. Holmes showed impressive grappling and relentlessness that Williams didn’t have a great chance to answer. Both fighters looked good in their exchanges, but eventually Holmes secured takedowns each round and dominated the round from that point on. Late in the second round he sunk in an arm triangle and forced Williams to submit.

The amateur card was highlighted by an impressive performance from Fortis MMA’s Zumar Archer who made his debut with a lighting quick TKO over Mario Mendez. In the first exchange Archer hurt Mendez with a jab that forced him to attempt a takedown. While Mendez attempted to finish the takedown, Archer began landing hammer fists to the side of Mendez’s head that knocked him unconscious and forced the referee to stop the fight in the very first round.

One thought on “Fury FC 41 invaded Dallas, TX and delivered a great night of MMA fights!”