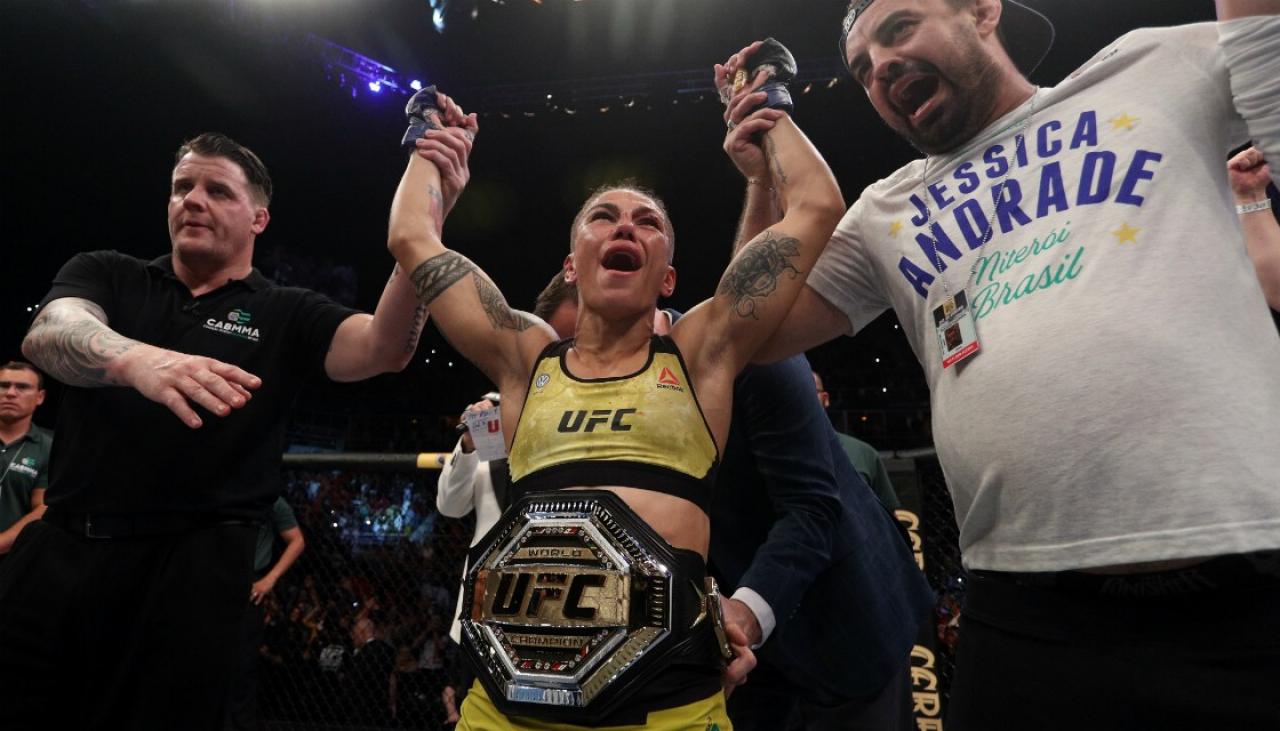 As the Women's Strawweight (115 lbs.) division continues to deliver exciting fights, UFC Strawweight Champion “Thug” Rose Namajunas (9-4 1KO) and Jessica Andrade (20-6 7KOs) put forth another captivating bout for mma fans everywhere. The fight served as the main event for UFC 237 while maintaining a common theme for the night and for most fight cards held in Andrade’s homeland of Brazil. Americans vs. Brazilians.

Throughout most of the night, fighters representing Brazil fell short, including the two best fighters Brazil has ever produced, Anderson Silva (34-10 23KOs) and Jose Aldo (28-5 17KOs). Andrade looked to end the night with a victory for her country, coming off three consecutive wins in the Strawweight division. Her last loss came at the hands of former UFC Strawweight champion, Joanna Jedrzejczyk (15-3 4KOs). Even in a losing effort however, Andrade showed that she was an elite talent and proved herself a championship caliber fighter. Before her bout with Namajunas, Andrade simply said “She chose the wrong place to defend her title… especially against me” regarding the bout taking place in Brazil.

Fighting out of Denver, Colorado, Namajunas was determined to defend her belt and represent her homeland country much like Andrade. This bout followed two consecutive victories over Joanna Jedrzejczyk; one capturing the title via knockout and the other defending the belt in an entertaining 5 round unanimous decision. Namajunas has lived up to her nickname “Thug” by holding the most finishes in UFC Strawweight history.

Namajunas is renowned for her excellent Brazilian jiu-jitsu, sneaky Taekwondo kicks, and her long reach that allows her to stick her opponents from any range. Overlooking Andrade always proves to be a mistake however, as she also excels in Brazilian Jiu-jitsu, whilst possessing dynamite power in her hands, brute force in her takedowns, and a world class chin. This fight had all the tools of a classic, and it delivered.

Early in the first round, Namajunas looked extremely sharp. She bounced around Andrade, and landed jabs and straight-right hands at will. She was content to remain near the perimeter of the octagon in an attempt to nullify the relentless pressure of Andrade. Andrade’s toughness showed early as she was cut just one minute into the bout. She continued to press forward however, throwing power shots in bunches, but not landing much. After absorbing several stiff jabs and 1-2’s from Namajunas, Andrade’s pressure paid off near the middle of the round. She clinched Namajunas against the cage, and initiated one of her signature slams, to gain top position on Namajunas. While being lifted, Namajunas attempted a Kimura arm lock, that caused Andrade to abandon the power slam, and drop Namajunas, avoiding the submission. Once the fighters returned to their feet, Namajunas landed a powerful knee that dropped Andrade, and put a cap to an excellent round for “Thug”.

As the second round began, Rose looked confident. She certainly won the first round, and possibly scored a 10-8 on the judges’ scorecards. She began the round implementing a similar strategy as she did in the first round, sticking and moving on the outside, snapping the head of Andrade back, one or two shots at a time. Andrade began to land at a slightly higher rate but continued to find nothing on most of her hooks to the body and head. The Brazilian then seemed to shift into another gear and began to put even more pressure on the champion. Once again, she cornered her against the cage, and dropped for a takedown. She lifted Namajunas with ease once again, but this time was unfazed by the submission attempt. As Namajunas attempted to adjust the armlock mid-air, she was suddenly slammed on her head, with force that would have silenced a crowed anywhere else but the homeland of Andrade. As the crowd erupted Andrade continued to defend the submission, until she realized that Namajunas was unconscious, and landed multiple punches to her head for good measure. Referee Marc Goddard then jumped in to rescue the unconscious Namajunas and call an end to the bout.

Andrade was crowned the new UFC Strawweight champion, hysterical in celebration, as she gave her new belt to her coach. The celebration will only last so long however, as she must prepare to defend her belt against one of the several Strawweight contenders, including Tatiana Suarez (7-0 2KOs) and Nina Ansaroff (10-5 4KOs).

Following the bout, Namajunas surprisingly hinted at retirement during the post-fight press conference. “I know I was whooping her butt, there’s no doubt about that. But we’ll see if I’m still interested in this” She said, then added “I just want to do something else in my life right now… We’ll see”. Being such a young fighter at only 26 years old, fans were puzzled to hear this. She stumbled to answer a question or two during the interview as well, seemingly showing signs of a concussion.