Forris Washington can be described as a visionary. In addition to owning multiple businesses, he has created a platform in the fight business that he has used to help several fighters and fans within the community. Global Fight Talk had the chance to speak with Washington and we were extremely impressed with his story, ambition, and selflessness.

Washington described himself as a one-of-a-kind individual within the fight business. “I’m the only ‘me’ in the business.” He said. “I’m the only manager/coach/promoter/trainer. I wear every hat.” Currently, Washington is flourishing in each of these areas, but he recalled being reluctant to venture into the fight world initially. He explained that he was content being a conditioning coach and when his wife (also a personal trainer) presented him with the idea to begin training fighters, he continually declined. Eventually, running into a fighter at a grocery store would send Washington on the path to where he is now. The fighter’s manager reached out to Washington, and eventually changed his mind. “His manager talked me into training him for one fight. A month later I got a phone call to train another fighter. A month [after that] I was training about 20 fighters. I tried to avoid it, but I was officially a coach.”

For the past two years, Washington has been focused on being a successful promoter while juggling owning multiple businesses. He took the initiative to begin his promotion after bouts involving his fighters where constantly cancelled for various reasons and once he agreed to take that path, he declared that he’d give it his all. “I don’t believe in going halfway.” He said. “I only know how to go hard.” He created Next Fight Up, a matchmaking platform that bridges the gap between fighters and promotions. Shortly after, he created Force Train Promotions. He explained that Force Train Promotions is off to an ideal start. “We were blessed enough to sell out our first show.” He said. “It’s been like that ever since. The last couple of shows we’ve had to turn people away because we were over capacity.”

He also explained that the early success of the promotion has allowed him to focus on giving back to the community. The way Force Train Promotions approaches business is nothing short of incredible. While the general landscape of the promoting business is to bring in as much money as possible, Force Train Promotions focuses on assisting those who need it. He confessed to taking a $17,000 loss from his last event which sold out! “I go in knowing I’m going to lose.” He explained. “But I also go in knowing that I’m going to help somebody out. I want to see everybody win. I’m not just talking about in the ring, I’m talking about in life to.” Force Train Promotions sponsors something different every event. From giving out $15,000 worth of scholarships, to sponsoring the special Olympics, what they’re doing is what we’d like to see from from the rest of the fight business.”

Washington’s reach does not end there however, he also owns the Savannah Boxing Club where the likes of Evander Holyfield and the Charlo twins have trained. He ultimately loses money to keep the legendary gym running but decided to buy it after the previous owner began suffering from a serious illness. Additionally, he owns a pharmacy, a day care, and a car dealership.

The nature of Washington’s generosity isn’t much of a puzzle. When he first moved to Houston from his hometown of Austin, TX, he had nothing but the apartment he was renting. He explained that for a span of 6 months he was a vegetarian because the only thing he could afford to eat was cans of green beans and corn after paying his rent and sending money to his recently born son. “I come from the bottom of nothing. The goal was to give back because I feel like I owe.” He said.

November 23rd Next Fight Up and Force Train Promotions will bring us another exciting night of boxing and Washington promises fireworks. “The fighters come to fight because I give the knockout of the night winner a $1,000 bonus.” He said. “Everybody’s trying to kill each other. Everybody wants that extra $1,000.” He added that his past events have had celebrities such as Tracy McGrady, Shannon Briggs, and the Charlo twins in attendance so there will be stars inside and outside the ring. Global Fight Talk looks forward to providing coverage of this card, as well as following Washington’s career. 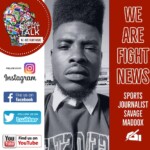 2 thoughts on “The life and work of Forris Washington”