I had the pleasure of interviewing boxing and mma trainer, Anthony "Tony" Mack. "Tony" is a former boxer who had a promising career, with world champion aspirations, torn away from him by injury.

Prior to turning professional, Tony’s amateur boxing credentials include the USA Boxing National Championship where he was awarded the Bronze Medal, Five-time Dallas Golden Glove Champion, and Three-Time Texas State Champion. On August 25, 2012, Tony made his professional debut and made quick work of his opponent, stopping him in the second round.

Mack trained under former boxer Derrick James and sparred with the likes of current world champions Errol Spence (24-0 21 KOs) and Robbert Brant (24-1 16 KOs) regularly. Mack was 13-1-1 with 8 Kos and he captured the Super Middle Weight Texas State Champion title in 2014.  Tony was on track for a successful Super Middleweight career, when he agreed to a bout with Matvey Korobov (28-2 4 KOs). During preparations for the bout, however, Mack discovered that he had multiple tears in his retina, forcing him out of the fight, and immediately into surgery. "Tony" Explained how urgent they were saying, "They told me 'we have to get you in to surgery or you can lose that eye for good.'" Unfortunately, the surgery was only a temporary fix for his retina that would go on to tear several more times, causing Mack to undergo 5 total eye surgeries. "Every time I thought of making a comeback, boom, another eye tear" Mack explained. With the prospect of completely losing his eye, Mack was forced to retire as a boxer.

In 2015, shortly after retiring, "Tony" began training fighters himself. A year later he opened his own gym, "T-Mack Elite Training" in Allen, Texas. The 33-year-old has enjoyed incredible success in his young training career; he produced 3 Golden Glove champions last year and currently is the striking coach of multiple UFC fighters including Dallas, Texas' Geoff Neal (11-2 6 KOs) and Steven Peterson (17-7 4 KOs) Mack has also recently worked with WBC USA Super Flyweight Champion Ernesto Delgadillio (11-0 2 KOs), who has expressed his satisfaction with Mack. "That was real big, to have somebody at that level to ask me for help." Mack explained.

Even with the early success with professional fighters, Mack expressed his greater interest in working with younger fighters. "I built myself from the amateur ranks to a high level, I want to take kids and do the same thing." When asked about his goals as a trainer, Mack simply said "My overall goal is to have multiple world champions in mma and multiple world champions in boxing". Surely, Mack's success will continue and he will likely reach those goals within the decade; it's hard not to root for such a genuine guy.

To train with Tony Mack the boxing gym is located at:

TMACK ELITE TRAINING INSIDE THE DEN 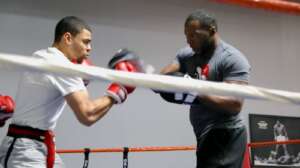