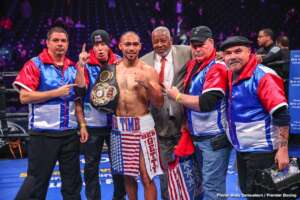 After a 22 month layoff, undefeated Welterweight (146) champion Keith "One Time" Thurman (29-0 22 KOs) defended his belt against veteran Josesito Lopez (36-8 19 KOs). After being sidelined due to an elbow and hand injury, the boxing world awaited the return of Thurman to attempt to stake his claim as the best Welterweight in the world.
"One Time" began the first round landing some sharp body shots, softening up the midsection of the 34-year-old Lopez. Lopez faced early trouble getting his punches off as Thurman threw powerful combinations to the head and body that forced him into his shell. The 30-year-old Thurman dominated the early rounds, landing a check hook in the 2nd round that sent Lopez falling to the canvas. Lopez returned to his feet shortly after the count began, and finished the round defensively.
Thurman continued to dominate, using a relentless yet versatile attack. His jab was accurate and active, despite his 2-inch reach disadvantage. Going into the 7th round, Lopez knew he needed to change the mood of the fight. He did just that, landing a huge left hook of his own that staggered Thurman; then he followed it up with a straight right hand that snapped Thurman's head back. Thurman showed excellent composure, keeping his head and feet moving, and recovered. Lopez used the momentum of this moment to land several of his best shots throughout the next 3 rounds. Thurman looked to take back control of the fight but Lopez was relentless, pressuring Thurman, and cutting off the ring, to counter his footwork.
There's an old saying "that every once in a while during a combat sports competition a fight breaks out" and that is exactly what happened in the 9th round. Both fighters landed big shots and returned them as well. Each of the ensuing rounds were very high paced and full of entertaining exchanges but the champion seemed to edge the challenger out in the later rounds using better accuracy, footwork, and defensive moves. Following the final bell, the final decision was announced for the champion via majority decision (113-113) (115-111) (117-109).
Lopez held his head high after the close defeat, and he had nothing to hang his head about. He showed extreme resilience and mental toughness, giving the undefeated champion a highly-competitive fight.
Following the bout Thurman expressed his desire to unify the Welterweight championships of the world but also cited Manny Pacquiao as a potential match-up in the near future. Thurman is certainly capable but has an incredibly tough road between him and being the unified Welterweight champion of the world.
Photo by: Andy Samuelson

One thought on “Keith Thurman shakes off ring rust to win a majority decision over Josesito Lopez By: Savage Maddox”